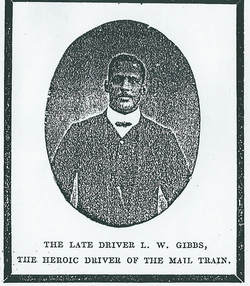 L.W. Gibbs
​The Second Railway Accident Near Thedaw On October 15th 1921
Owing to the sudden floods between Thedaw and Samon Stations (mile 325/19) on the main line between Rangoon ad Mandalay, the engine and three third-class bogie-carriages of the Mandalay Express train were derailed and partially overturned at 3.50 a.m. on Saturday, October 15th.  The cause of the trouble is attributed to the bursting of an irrigation tank, situated two miles west of Thedaw station.  When the embankments of the tank gave way, the water flowed across country and breached the railway track at miles 325/19 on a curve in the line.  On reaching the flooded portion of the line, the driver of the Rangoon-Mandalay Express train, which had left Rangoon at 12 noon on the previous day, applied his brakes but the engine and the four leading carriages were derailed.  The engine capsized and the carriages canted over.

No casualties were caused, either amongst the passengers or the train staff.  Shortly after the derailment occurred, the floods caused two more breaches in the track behind the derailed train.  However, it was found possible to take back the passengers of the Express train to Thazi junction.

The heavy floods have done considerable damage this year, and, about the same time as this trains derailment, breaches of the railway track were caused between Myitha and Minzu, between Minzu and Kyaukse and between Meiktila and Yegyo on the Thazi-Myingyan branch line.  Our views of the scene of the accident give a pretty good idea of the extent of the floods and of the damage done.
​ 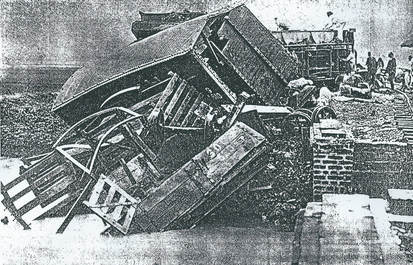