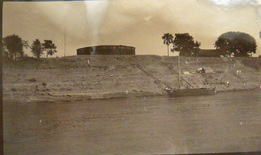 B.O.C. Tank at Pyinmana on river below Yenangyaung loading into barge, 1909,
​The roots of the Burmah Oil Company lie in the minds of two men, David Syme Cargill and Kirkman Finlay, both of whom had been involved with the oil business in Rangoon since the 1870’s. The overthrow of King Thibaw in 1885 effectively removed all barriers to exploration and development. The Burmah Oil Company was formed the following year in Scotland and obtained grants of oilfield concessions in the new territories.

Capital investment became worthwhile, and the first machine drilling in Burma was underway as early as 1889. In the early years, refining was carried out at Dunneedaw in Rangoon, with the crude oil being brought down from the fields by the Irrawaddy Flotilla Company. This arrangement was a good source of income for the I.W.F.C., but a continuing drain on the resources of the B.O.C., who planned and executed a pipeline project from Yenangyaung to Syriam which was completed in 1908, giving them independence and reviving the fortunes of Syriam, where a new refinery was built, with greatly improved access to the sea and external markets.

The principal use up to about 1916 was kerosene and paraffin wax for candles. Another use was as a coating on timber buildings to prevent termite attack. Hence in early photos of government residences and office buildings in Burma and some parts of India, you always see them to be a dirty dark color. After WW1, the Royal Navy converted from coal burning ships to oil burning and thus began an expanded range of petroleum products. Later in the 1920’s – as the demand for sealed road construction developed, the product range was expanded to include asphalt.
​
It is clear that a huge enterprise such as this would have had to recruit locally, and many of our people will be found in the employee lists right from the start, in effect falling off the grid of records such as Thacker’s Directories.
We are therefore very grateful for the cooperation and facilities which have been provided by BP Archives in making this valuable material available for transcription.