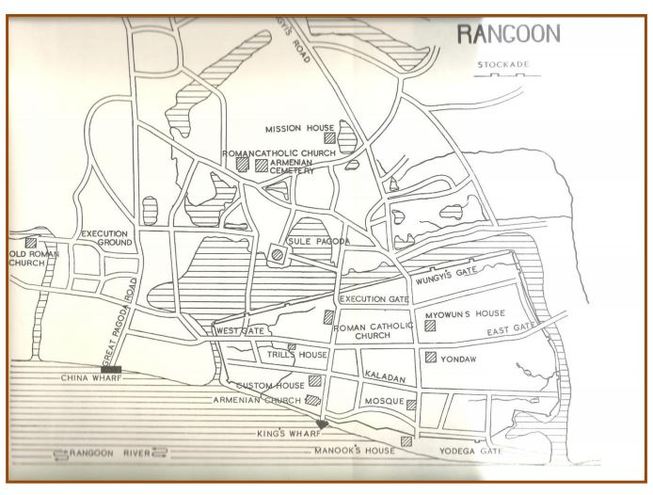 A  History of Rangoon - European Cemeteries​                                Page 2/10
EUROPEAN CEMETERIES
In addition to the original English cemetery which was built over after 1852 (see The Crisp Family details below) there are in Rangoon other old European burial grounds, now disused, which are of some interest, while in two of the cemeteries still in use there are some noteworthy tombs.

Botataung Pagoda
There are memorials here to a number of officers and men, mostly of the Navy, who perished during or shortly after the war of 1852. The following are buried here:-
Rev’d. Thomas T. Baker Chaplain, H.M.S. “Fox”  Author of a well-known book, “Recent Operations of the British Forces at Rangoon and Martaban”

The deaths of both Rev’d. Baker and Asst.-Surgeon Morgan are recorded on a memorial lamppost erected by the Municipal Committee on the 14th Oct. 1895 in the middle of Monkey Point Road, opposite the Botataung Pagoda; the inscription on the lamppost states that Baker, Morgan and four others unknown lie at a point thirty feet due south of the lamppost.
A  History of Rangoon - European Cemeteries​                              Page 3/10
​
The following who fell or were mortally wounded in action or who were drowned while on duty, between the years 1852 and 1855, are buried elsewhere but are recorded at the Pagoda:-
​Lt. William Bryce Mason. Drowned while rendering assistance to the wreck of the steamer “Mouzuffer.”
The following who died of disease between April 1852 and July 1853 are similarly recorded:-
A History of Rangoon - European Cemeteries​                   Page 4/10
​
​Shwe Dagon Pagoda - where the following were buried:-
Lt. Robert Doran H.M. 18th Royal Irish.  Who fell at the taking of the Pagoda on 14th April 1852.
​
Capt. Granville Gower Loch R.N. H.M.S. “Winchester” Who died of wounds on 6th February 1853.

​The remains of these officers were removed to the Cantonment Cemetery after the demilitarisation of the Pagoda platform.
​
​A Memorial to Lt. James Marriott Taylor 9th M.N.I. who was killed at Donabyu on the 19th March 1853 and was buried where he fell, was removed from the Shwe Dagon to the Cantonment Cemetery at the same time.
​
St. John's R. C. Church
Sacred to the memory of
Lt. James Marriott Taylor 9th M.N.I.
Acting interpreter to Her Majesty’s K.O.L.I.
who was killed on 19th March 1853
whilst gallantly leading a company of the Regt. to the
assault of a stockade In the Donabyu district of Pegu.

​The inscription is not very clear and the age might be 34 years, though the expression “for many years” suggests that 54 is correct. He was evidently a merchant-captain but information about him is lacking. The work “country” has been misread “cavalry” a rubbing of the inscription leaves the matter beyond doubt. The stone was in use as a dhoby-stone until it was rescued by the Chaplain and erected in the lych-gate of the cemetery.

Robert Samuel Edwards Collector of Customs. Died 3th Jan. 1877 aged 76 years.
The Armenian Cemetery
Apparently founded in the early days of Rangoon. There are twenty four graves but only eight bear inscriptions as follows:
​ A History of Rangoon - European Cemeteries​                   Page 7/​10
​
Carapiet Zachariah and Arratoon Lazar Jacob were relatives of the Akaukwn Gregory who died in 1788.
(Information kindly supplied by M.H. Vardanian Warden, Armenian Church of St. John the Baptist, Rgn.)
​
​Capt. May Flower Crisp
There were several members of the family of Crisp in Burma during the first half of the nineteenth century. The head of the family was May Flower Crisp, who was born in England in December 1788 and became a sailor. For some years he was an impressed seaman on a naval vessel during the French wars and after the conclusion of the wars he came to India as a ship's captain and ultimately set up as a merchant in Burma. He had evidently traded to Rangoon before 1824 as in November 1823 he conveyed information to the Government about conditions in Rangoon and in 1824 was employed as a pilot by the expeditionary force. After the first Anglo-Burmese war he entered into partnership with R.J. Trill so forming the firm of Trill & Crisp, dealers in timber and cotton piece- goods. Trill apparently survived till about 1840 and on his death the firm became Crisp & Co. Crisp was joined by his son, Charles Malcolm Crisp who came out from England in charge of one of his father’s ships, and then settled down in Burma. Two of the elder Crisp brothers, Joseph and William, were also commanders of ships and made periodic visits to Rangoon.

​M.F. Crisp was a man of active mind. While in Moulmein during his exile from Burma proper, he formulated somewhat novel views of politics; a strictly religious man who was what was rare in those days, a teetotaler, he held that religion should be the basis of government; he was also an advocate of the elective principle in the making of official appointments, and would have applied adult suffrage, not merely male suffrage to this purpose.

A History of Rangoon - European Cemeteries​                   Page 8/​10
​
The firm was hit hard by the war of 1852, their buildings in Rangoon had been destroyed and their property confiscated
and the Governor-General’s refusal to permit compensation left the firm in a bad way. Crisp went to England and induced a Member of Parliament to take up his grievances, but without avail. He returned to Burma and died in Moulmein in 1866. Some years before his death he published locally a pamphlet attacking the economic policy of the Government of British Burma.

His son C.M. (Charles Malcolm ) Crisp, born in England on 14th February 1814 predeceased his father. He died on the 20th May 1862 and was buried in the Pazundaung Cemetery. He held the post of Assessor of Income-tax as well as that of Postmaster.

This monument has been erected in memory of the persons above named who are buried in 33rd Street
Block E3 Rangoon, where now stands a memorial lamppost with their names recorded thereon.
A History of Rangoon - European Cemeteries​                   Page 9/​10
​
Of the children named, Sarah, Susan Eliza, Josephine and William, were the children of C.M. Crisp who also had three other children whose births are recorded in the registers of the Cantonment Church. They were, Julia Primrose, born 6th Aug. 1852, Godwin William, born 5th Feb. 1855 and Edwin Henry born 6th June 1856.

Malcolm Crisp, who is shown as the son of May Flower Crisp, is said to have been actually the son of either Joseph or William Crisp and therefore the nephew of M.F. Crisp.

Capt. William Crisp is doubtless one of these brothers of May Flower Crisp.

There was another member of the family in Rangoon also, known as Capt. Crisp Junior, a cousin of C.M. Crisp and for a time a commander of one of the firm’s vessels. After the war of 1852 he became a pilot and the Cantonment Church register show the birth on the 2nd June 1861 of Amy Florence, daughter of William Crisp, Pilot, and Hosannah Crisp.

Mr. Trill, the date of whose death is not specified on the memorial, was possibly R.J. Trill, the senior partner of the firm, who was made a prisoner by the Burmese in 1824. “Mr Trill” is referred to in an official document of the year 1839, but the absence of subsequent reference suggests that he must have died shortly after that date. The firm of Trill is referred to by Symes in his account of his mission to Burma in 1802; thus unless some elder member of the family of Trill was in Rangoon in 1802, Trill must at his death have been considerably older than the fifty years with which the Memorial credits him. Possibly the Memorial refers to G.R. Trill.

​Mr. Speirs Mate of the Navy was William Speirs or Spiers or Spears, half-pay naval lieutenant, merchant of Rangoon, who owned a pukka house and godown which were destroyed in 1852 He made a claim for Rs 10,000 compensation. He should not be confused with Thomas Spears, Phayre’s correspondent at the Burmese Court.

Mr Hugh Speirs was possibly a connection of William Speirs. He is referred to in accounts of the period as a “British merchant from Umarapoora”

Capt. Bidan' s connection with the Crisps was through the purchase from one of them of the schooner “Original.”

The identity of the Chief Officer of one of Messrs. Crisp & Co's vessels remains unknown.

There are certain peculiarities about the memorial. It is odd that though the Cantonment Chaplain was able to record the birth of Julia Primrose Crisp which occurred in 1852, yet he made no entry of the death of Susan Eliza which also occurred in 1852, and, still more notably, no entry of the birth and death of William which took place as late as February 1854 by which date the registers were being regularly kept. The coincidence of the dates of birth and death of Sarah and William, both of who are given as being born on the 22nd February and having died on the 28th February in 1842 and 1854 respectively, is also remarkable.

All these circumstances together with the absence of details about some of the deaths recorded and the error in the parentage of Malcolm Crisp, tend to case a measure of doubt on the accuracy of the information given in the Memorial. The Memorial was evidently erected some considerable time after the deaths which it records, for the reference to M.F. Crisp as “the late” Captain Crisp shows that it was not erected till after his death in 1866; thus the dates entered from memory of fairly remote events.

While there is no reason to doubt that the burials occurred, the dates given must be accepted with caution. The 33rd Street memorial is reproduced almost verbatim on a plaque in the Pazundaung Cemetery, there is no variation at all in the wording except that the last two or three lines, consisting of the words “who are buried in 33rd Street, etc.,” have been omitted. It is improbable that the remains of those whose deaths are so recorded were removed to Pazaundaung, for the 33rd Street Memorial clearly states that they “are buried” there, while the Memorial in the cemetery omits any reference to actual burial. It is more probable that the Memorial was placed in the cemetery for the sake of vicinity to the grave of Charles Malcolm Crisp which is close by.