​This short but beautiful pictorial biography has been arranged by Susan McPhedran and is published with her kind permission. 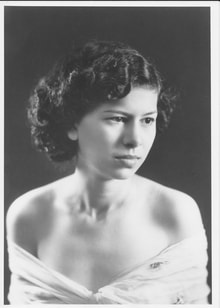 b: Rangoon 1922   d: Toronto, Ontario 2020​
Susan says:-
"My mother-in-law, [Honor,  a.k.a. "Peggy"] had very few pictures which survived the war.  They are mainly copies which were fortunately sent to relatives who were later evacuated.  Her mother, grandmother, grandaunt, half brother and a couple of 1st cousins were some of the direct relatives who died on the trek.   The more I try to sort out my husband's family tree, the more I think that the entire "Anglo" community was related by blood or marriage." ​
Additional comments from Susan:-
​One of the real pleasures of having access to the ABL was reading Valerie Willix's memoir.  She was Peggy's 2nd cousin on her father's side.  The connection was through her grandmother, Annie Florence Willix nee Graham, who died of cancer.  Annie was sister of Peggy's paternal grandmother, Isabella Emily Hogan nee Graham.

Peggy's parent marriage was short lived.  Her father was a feckless womanizer with a fondness for the "drink".  His brother was more respectable and the father of the Hogan cousins that Valerie and her sister would see in Rangoon.  Peggy's mother didn't care for her m-i-l but really liked her grandmother-i-l.  This would be Granny aka Mary Johannes, who married  1. John Charles Graham   2. Edward Charles Pusey.   We do not know the identity of Mary's mother but her father was an Armenian merchant.  There was/is a longevity gene running through the Armenian community, also an entrepreneurial one which Valerie's grandmother inherited - but not the longevity one.  My m-i-l inherited both. 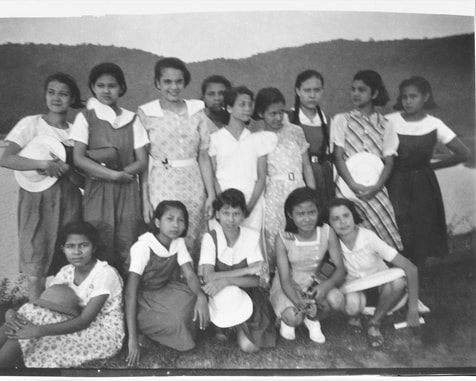 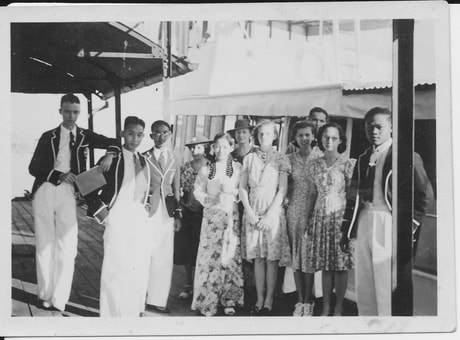 Debate at Syriam
​Susan comments:-
"On the back - January, Tuesday, 30th, 1940.  Debate at Syriam.
I think Peggy is the 2nd young lady from the right.  I do not know how the school year worked.  Peggy would have been 17 yrs, 5 months.

She attended the University of Rangoon for a year or so.  Her father popped up out of the blue and announced he would pay for her to attend, so off she went.  At some point during the 2nd year, the school advised her that her fees were still outstanding.  Aunty V and Uncle Terence said they would pay but she decided to start working.  Even if she had stayed, everything would have come to an abrupt end in early 1942."
​Fresher Ball 1941 attended two days after Peggy turned 19.                                                                                Reverse of photo
Peggy was her nickname.  I gather that nicknames were very common in Burma.  In any event, she was born Honor Fuchsia Hogan.  She is identified as Peggy Gilbert in the photo, Gilbert being her stepfather's name.  She married Malcolm Mealin, Michael's father, during the war.  2nd husband was Donald "Jock" McPhedran, Colin McPhedran's older brother.  3rd husband was Alec MacPherson, who had no connection to Burma.  She lived a long and eventful life, dying suddenly at the age of 97 ½ in January 2020.  Fortunately, it was just before the world shut down.  The lockdowns would have been very difficult for her and the family.

Back to the photo.  Nothing is known about Knobby Clarke.  Peggy Cameron and Douglas Coshan subsequently married and settled near Birmingham, UK.  Brian Cockerton, was Peggy's 1st cousin on her mother's side.  He subsequently married Hyacinth "Cynthia" Margaret Barton, one of the diocese girls.  They moved to Perth, Australia after Brian retired from the Indian Army. 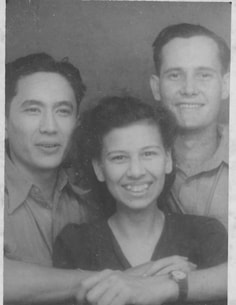 I believe Malcolm and Dennis knew one another from high school - St Paul's.  They were also both in ABRO.

With regards to Peggy, she was 2 months pregnant with Michael in this photo.

With regards to Dennis see Burma Richard: Search results for rosner (burma-richard.org)
I still have the photo as I was unable to track down any family at the time.

We know little of Malcolm's service during the war.  Captain with the Gurkhas is the extent of it.
​His parents divorced when he was 11 and afterwards, he rarely saw his father.
He [Dennis Rosner] was born the same year as my husband's father and I believe they were friends from high school - St. Paul's Catholic High School, now No. 6 Basic Education High School.   The other photo is of Malcolm E. Mealin with wife or soon to be wife [at that point known as Peggy Gilbert] with Dennis.  Malcolm and Peggy were evacuated as members of the forces.  Presumably Dennis was as well.  I believe the photos were taken in India 1941/1942.

According to the ABL, Malcolm was with the No 4 Platoon., B.I.C. in 1944.  We don't know much about his military history but thought at one point he was also a Captain with a Gurkha regiment.
​Burma Broadcasting Studio
Calling Blighty" films - Burma Star Memorial Fund.
​Comment from Susan:-  "It seems to have been produced so U.K. soldiers could send messages home in 1945. " 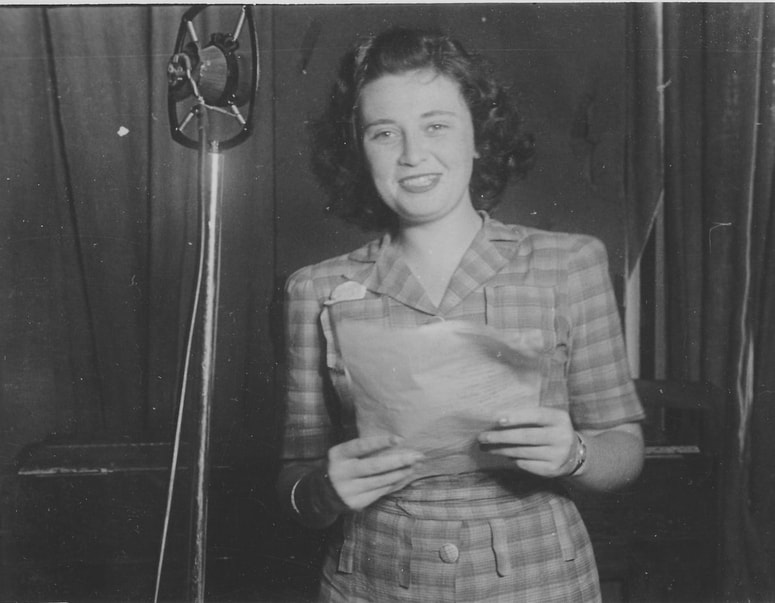 ​The reverse of this photos says:-  Joyce Thomson of Blighty Calling 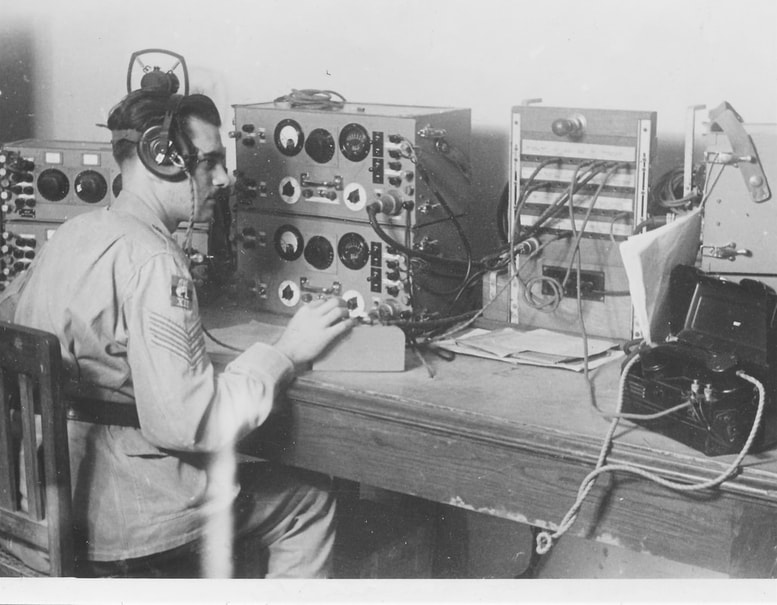 The reverse of this photos says:-  ​Ray Horton at the Control Board for Variety Highlights "I was part of the show" 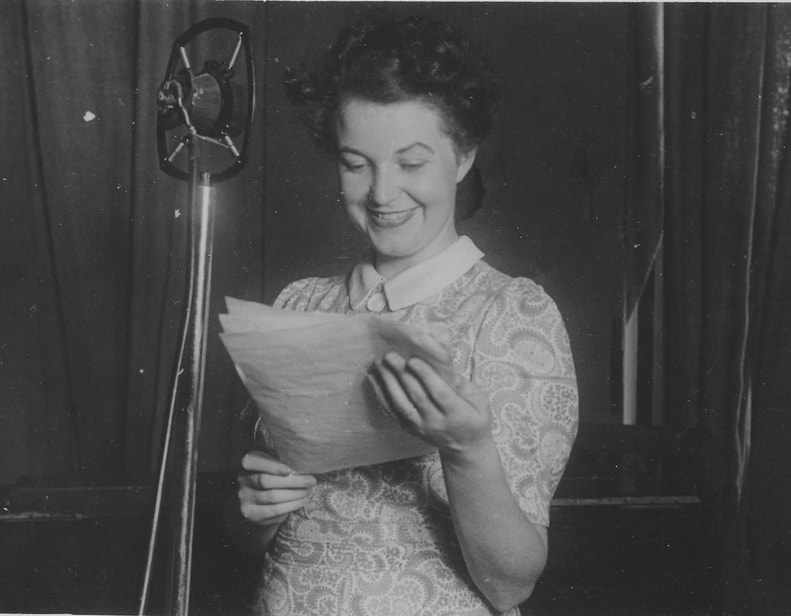 The reverse of this photo says:-  Unidentified singer 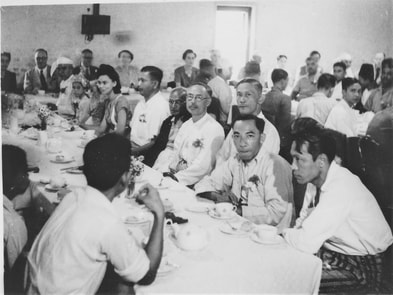 ​Susan comments:-
"​The picture was taken at the dinner honouring Uncle Terence after he was awarded the M.B.E., he is at the head table, far left corner.
The woman to the left could have been Aunty V.
​The only other known person was Daphne Farquharson, nee Murrell - also a Diocese girl.  She was one of the few women attending.

At the dinner, he was presented with a beautiful hand drawn scroll in a lacquered tube.  We still have it plus his MBE."
​Pegu Club 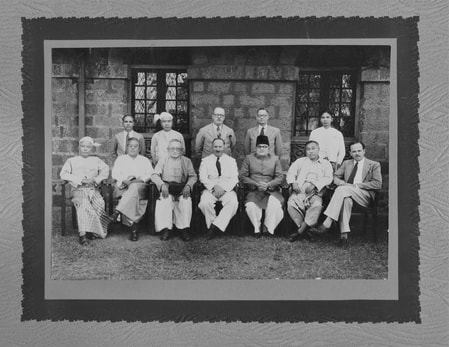 Susan comments:-
"This photo was taken about July 1947.
Uncle Terence is in the back row, 2nd from the right.
​We think it was taken outside of the Burma Railway headquarters in Rangoon."