History of the Hong Kong & Shanghai Bank (H.S.B.C.) in Rangoon 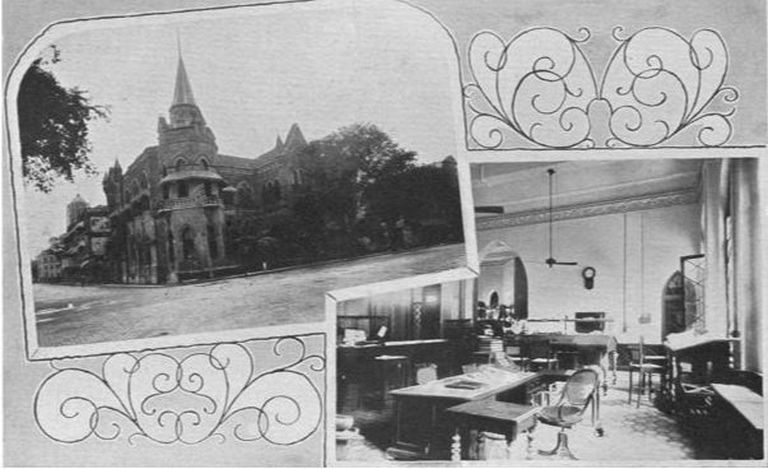 The Hong Kong and Shanghai Banking Corporation Limited opened in Hong Kong in 1865 but it wasn’t until 1878 that an agency in Rangoon was established. An agent based in Bangkok was asked to visit Rangoon for one season to see if business could be done there and if shown to be profitable an office may be opened permanently.

At that time his salary was $500 per month with a housing allowance of $100. It became a full branch in 1891. Some eager staff members learned the Burmese language though not all persisted but by using the comprador system this enabled business to be understood in both languages. Junior staff spending some time in smaller branches such as Rangoon were sent elsewhere in Asia to gain more experience and later returned to Rangoon. Local staff were invaluable for their customer knowledge.

The original branch office and location is not documented.

Arnold Wright’s book “Twentieth Century Impressions of Burma” stated that in 1901 “the imposing premises now occupied on the corner of Merchant and Barr Street (now Mahabandula Garden St.) were built on a site that had previously been purchased for the purpose.” Maurice Collis writes in his book “Wayfoong” that the building was unusual in that it incorporated within itself a disused Catholic Church, which was on the site on purchase. This building certainly resembled a church as can be seen from the illustrations on the following pages.

Three of the walls were street side. In one wall was a niche which once contained a statue of a Saint or similar. The branch manager reported in 1953 that an Indian Holy man had taken up residence there, sitting cross-legged and still for years. He attracted visitors and the bank left him in peace though they had to disguise his betel juice offerings with a well blended in coat of paint.

​As the business grew the building was enlarged and altered. Beginning as a two-storey building, the lower floor was bank offices and the upper floor a large flat for staff. This was in time divided off and converted to a smaller flat with an Inward Bills area and storage for books. Over the years the bank was extended into the back yard, fluorescent lighting put in, painted inside and out, desks re-polished and air-con. installed for reasons of health and comfort but also to reduce noise from the street. Perhaps the doors were left open for a throughput of air!​
History of the Hong Kong & Shanghai Bank (H.S.B.C.) in Rangoon               3/12
​ 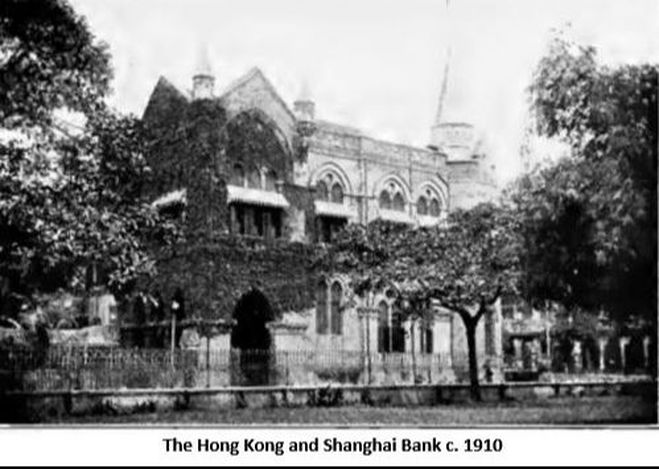 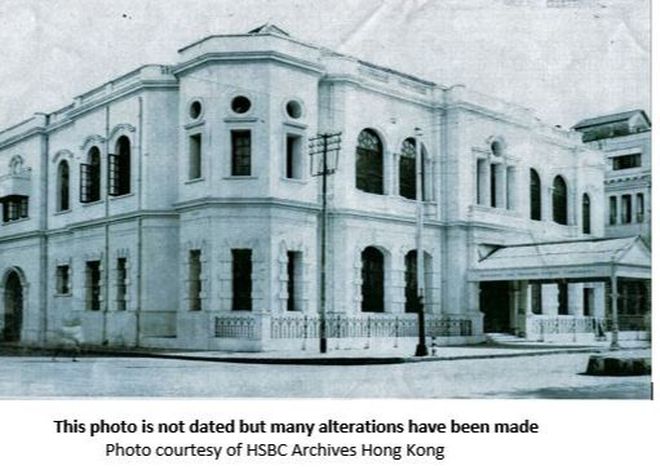 History of the Hong Kong & Shanghai Bank (H.S.B.C.) in Rangoon               5/12
​
​The bank had bought “White Lodge” in 1923, a handsome property on a three acre plot with outhouses about six miles outside Rangoon and overlooking Victoria lake (now Inya Lake) in Prome Road (now Pyay Rd.) This housed the bank agent/manager.
​ 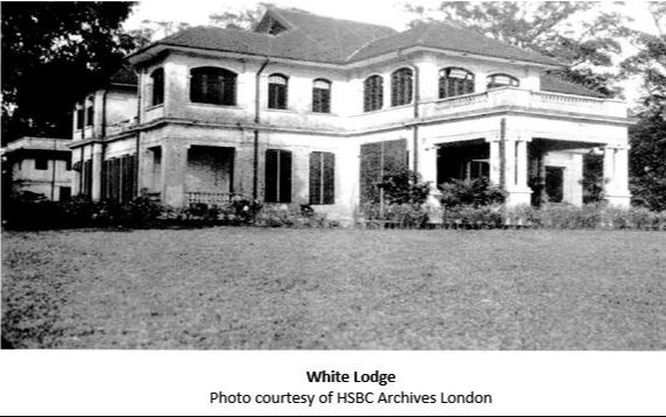 History of the Hong Kong & Shanghai Bank (H.S.B.C.) in Rangoon               6/12
​
Early business included foreign exchange including that for Chinese and Indian migrant workers needing to send their money home, finance for rice production and account keeping for foreign shipping companies and their agents. The branch also financed Burmese export of Rice, Timber, Cotton, Pulses plus advancing loans for import and export.

In 1916 the branch comprador was asked to list major local importers including details of their business operations. HSBC was financing 19% of Burma’s total import trade and just over 17% of total export trade.

During 1920-1930 the bank was financing traditional exports of rice and timber (teak) destined for Singapore, China and Japan. Other exports included rubber and Wolfram (Tungsten) ore.

​War years
On 23 December 1941 the Japanese bombed Rangoon, which suffered over 2000 deaths.

On 15th February 1942 Japan invaded Singapore exposing Burma to possible occupation. Local bank staff refused to stay in Rangoon so Government authorised the transfer of banks to Mandalay before Rangoon was evacuated. Rangoon was heavily bombed. Between Feb. 15-24th staff left Rangoon on the “Bankers Train” as there were very few buses leaving Rangoon for Mandalay. HSBC managed to take with them most of the important ledgers and records, others had been sent to India with the remainder being destroyed.
​
The Government had found a large two storey building in Mandalay where all the banks were housed. Counters were made out of packing boxes and with a staff of 3 and a typist HSBC opened for business again on March 2nd 1942.
History of the Hong Kong & Shanghai Bank (H.S.B.C.) in Rangoon               7/12
​

​Many former HSBC customers were leaving Burma so business was limited and on 3rd April 1942 the new bank building was destroyed in an air raid. HSBC finally closed on 13th April 1942.

The London office proposed that the three exchange banks HSBC, Chartered Bank and Mercantile Bank be transferred 130 miles north of Mandalay to Lashio but the plan was abandoned as the war situation worsened. Instead London and Calcutta reps. worked out evacuation plans.

The banks were requested to remain open to meet military and other banking needs but they were eventually forced to moved north to Shwebo. Here the Reserve Bank of India had set up their treasury after evacuation from Rangoon.

Staff eventually took a plane arranged by the banks and arrived in Calcutta by 15th April 1942. Luggage was limited to 35 pounds each so heavy ledgers taken from the Rangoon branch had to be left behind.

The banks had arranged with the Indian Govt. to allow the Rangoon branch business to be transacted from India but as there were no Rangoon customers in Calcutta there was no reason to remain there. The office was first scheduled to move to Lahore but as accommodation couldn’t be found, instead went to Simla a Govt. hill station in Northern India. It was here that the Burmese Govt. was stationed in exile.
​
Bank books were reconstructed and bank staff were told to pay out any reasonable sum to Burmese Evacuees. Junior staff remained behind for military service. Some staff members just returned from leave set off on foot to escape Burma. Whilst they eventually reached India a member of staff died in Simla of Malaria having contracted it during the escape.

Post War
White Lodge had been thoroughly looted. After major repair and renovation it was leased to The Prome Road Nursing Home Association until 1958.
History of the Hong Kong & Shanghai Bank (H.S.B.C.) in Rangoon               8/12
​

In December 1945 HSBC re-opened in Rangoon. The building having survived the war was structurally sound but needed enlarging. This was completed by June 1946. Recovery was slow but the bank financed heavy shipments of rice to HK and Singapore, which were desperately needed after the war. The banks were vital in reconstructing Burma providing financial help after their customers had lost everything in the war. Post war HSBC financed most of the Burma timber trade and cotton trade.

“Waterside” situated on the lake and not far from White Lodge was purchased in 1947 for the present manager to reside in.

In 1948 the bank was floodlit together with other foreign banks and buildings to celebrate Independence.
​
Tehmie Lodge a small house was purchased in 1950 for the bank accountant. Whilst other staff had use of the flat within the bank, junior staff lived in the Pegu Club. It was discussed that a second house could possibly be built within the grounds of Waterside or another house be leased instead for staff. During the 1950s Bank officials made trips out to their customers to build relationships with the Burmese. Merchants welcomed the bank and were happy with the excellent service it provided.

​1960’s - HSBC continued to finance traditional exports for as long as possible but the political situation was getting more difficult.
​
February 23rd 1963 all foreign banks were nationalised with HSBC being renamed The Peoples Bank No.9 and the former Mercantile Bank of India Ltd (purchased by HSBC in 1959) The Peoples Bank No.5. All assets and liabilities were taken over and transferred to the Revolutionary Government with immediate effect. Safes were sealed and keys handed over.

​In March staff started to leave Burma.
​The Peoples Bank returned very little money to London with no compensation for property.

​In 1995 HSBC opened a small office in Rangoon to upgrade to a full office later however the political and economic situation continued to deteriorate during the following few years so the office was finally closed in 2000.
​ 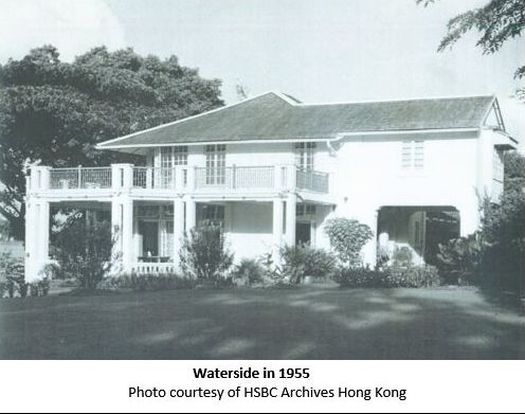 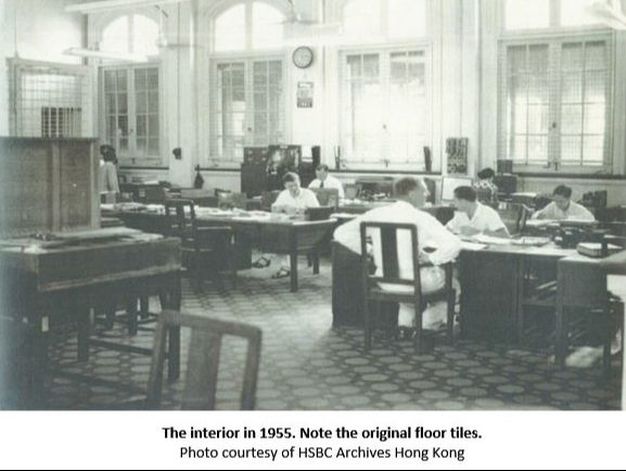 ​On our visit we were strictly forbidden to take any photos inside the bank but graciously permitted entrance, the mezzanine level could still be seen and the original floor tiles remain unchanged since the bank was built.
​
Waterside still exists but is impossible to photograph from the lake and is guarded behind gates roadside.
The White Lodge couldn’t be found. 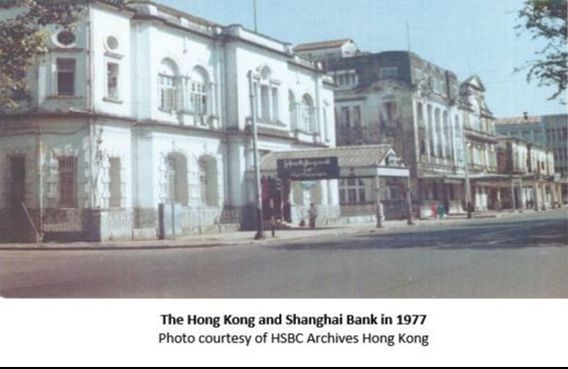 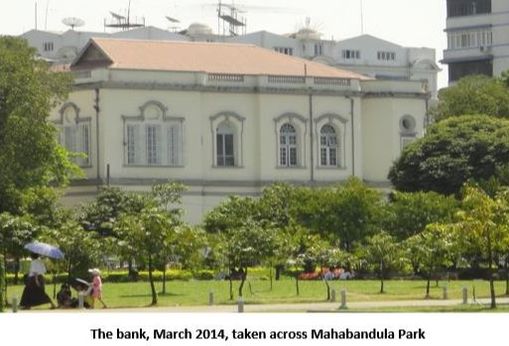