Sentry Page Protection
Please Wait...
Extracts from
Wanderings in Burma
by
George W. Bird,
published 1897
to search this page press ctrl + f
Mandalay to Prome by Steamer
...  Leaving the shore at Mandalay..... passing on the left bank the dockyard and repairing sheds of the Irrawaddy Flotilla Co., abreast of which are moored a number of disused steamers...  On board one of them the huge cannon in front of the palace, bearing on them the mark of ownership, “Georgius Rex” were doubtless surreptitiously carried up from Rangoon....

Three miles below, (Kyauktalon) on the right bank, is a large village of Myinmu. ...  It is a growing place and of the head-quarters of the southern sub-division of the Sagaing  district...

Sameik-gon, on the left bank...   About a mile below and on the opposite bank is Nagabauk.... a large mission station of the Roman Catholic, peopled originally by Portuguese and French prisoners of war...

Immediately opposite Nagabauk on the left bank and close to the water’s edge is an old Banyan tree, the base of which is surrounded by a masonry platform.  Here, on 24th February 1826, the Treaty of Yandabo was signed by Sir Archibald Campbell and the Burmese delegates appointed by the King.  In consequence of this the tree is sometimes referred to as the “Treaty Tree.”  Although nominally at Yandabo, the village of that name is some two of three miles further downstream....

For some years succeeding the annexation, Myingyan was an important military station as the large cantonments and extensive range of barrack accommodation still testify.  Owing to the present police of strengthening the garrisons on the eastern frontier, its strategic importance has decreased so that at the present time the garrison consists of the head-quarters of one Sepoy regiment only, with a few details of other services....

From Myingyan the course is south-west till Pakokku is reached on the right bank, thirty-five miles from Myingyan...  A timber revenue station is maintained here by the Forest Department, at which all the timber extracted from the Chindwin Forests by the Bombay Burmah Trading Corp. is checked and passed.  This Company, it will be remembered, leased these and other forests from the Burmese Government and the failure or disinclination of the King to submit the points in dispute with the Company, to arbitration, was one of the primary causes of the war.  On the British assuming the Government of the country, the leases held by the Company were allowed to hold good and have still some time to run.  During the working season of 1893-94 the Company alone extracted from the Chindwin and Yaw forests....

... After passing the Pin river, the channel becomes much blocked by islands and sand-banks which are especially numerous in the neighbourhood of Yenangyaung.  The town, as the names implies (Ye-nan, crude petroleum and Gyaung, a ravine or chasm,) is the chief centre of oil bearing tracts in the  Magwe district.  There are twenty-six demarcated square mile blocks of such land altogether.  This area consists of wells  which are the privilege of Government, leased to the Burma Oil Co., the native reserve assigned to native workers or twin-zas who have inter se, of digging wells in it, four square miles of the remaining area has been leased to the Burma Oil Co. and a similar area to the Lepel Griffin Syndicate.  Several other capitalists have applied for other blocks.

The wells are situated in an irregular plateau surrounded by ravines about 3 ½ miles from the village.  The working of the Burma Oil Co. are under the superintendence of experts from the United States and the oil is conveyed in iron pipes to the oil flats moored to the bank and there loaded in bulk and carried down the river to the Company’s reining works at Rangoon. 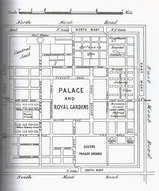 Mandalay
Mandalay City or Fort Dufferin
The city of Mandalay was founded by King Mindon Min in 1857.  It took three years to build and the King moved to his new capital from Amarapoora in 1857, occupying a temporary palace to direct the building operations.  The city is built in the form of a square, each side
of which measures one and a quarter miles in length.  A brick wall twenty-six feet in height and three and a half feet thick and crenulated at the top, encloses the whole.  The wall is backed by an earthen rampart, twenty-five feet wide, which reaches the apertures....

The Central Jail, situated in the extreme north-west corner, is capable of accommodating 1,112 prisoners of all classes and the Civil Surgeon of Mandalay is the Superintendent.

... It is ten years since the British occupation of Mandalay and yet the Church of England has no representative building, other than the Church of the Society for the Propagation of the Gospel Mission, erected by King Mindon Min nearly thirty years ago.

The Roman Catholics have an imposing Cathedral, built at a cost of a lakh of rupees by a wealthy native convert.  The Baptists, a handsome  memorial Church to Dr. Judson’s memory, the Wesleyans, a masonry Chapel, the Church of England, a consecrated Hpongyi Kyaung or monastery, from which the priests were evicted by the moral persuasion of British bayonets!
A.B.M.
... About a hundred yards to the west of the lake is the village of Aungpinle, where during the continuance of the First Anglo-Burmese war the Christian captives were kept.  The King, seized the missionaries of the American Baptist Mission, together with any other Christian whom on the outbreak of the war, happened to be in the country.  Among the former were Dr. and Mrs Judson and Dr. price.

The indignities and cruelties  suffered by these saintly people are melancholy chapters in the history of the mission.  After six month incarceration they were released on the cessation of hostilities and Bagyidau employed Drs. Price and Judson as his mediums in the conclusion of peace at Yandabo.

The cruel treatment and inhuman treatment shown to Ann, the wife of Dr. Judson, who had but lately become a mother, so undermined her health that she died shortly afterwards, just after leaving Moulmein on her voyage home.  Her grave, marked by a humble tombstone, is on Amherst Point, at the entrance to the Salween River, thirty miles from Moulmein.
The Mu Valley State Railway is being extended from Mogoung to Myitkyina, a distance of forty miles, and when this is opened a great impetus will be given to the trade of the Upper Irrawaddy....  There is, therefore, every reason to expect that Myitkyina will in time become a great centre of trade.  At present, beyond the barracks and usual Government Offices, it contains few houses and no large native community.

Pakokku to Kindat and Homalin up the Chindwin River
... Ten miles above Sadon, on the left bank of the river, Monywa is situated. It is one of the nicest and most picturesque stations in Upper Burma and is the head-quarters of the Lower Chindwin District.

besides the Deputy Commissioner’s court and offices, it forms the head-quarters of the Lower Chindwin Military Police Battalion and is an important station for forest revenue....

Eight miles above Monywa and on the same bank of the river is Alon, a place of great importance in the King’s time...  Opposite Alon some picturesque hills topped by pagodas are seen.  These formed the stronghold of the dacoit bands which molested the garrisons at Alon during the early years of the occupation...

... Mingin is reached.  This is the head-quarters of the southern sub-division of the Upper Chindwin District and in the Burmese King’s time was an important military post....  It is an important station of the Bombay Burma Trading Corporation and just below the town in 1885 four European assistants were treacherously murdered by order of a Thandau-zin specially despatched in a launch from Mandalay for the purpose by Supya-Lat, the Queen and the Taing-da-Mingyi.

... Kalewa s the nearest port on the Chindwin the Chin Hills and is distant about 40 miles from Fort White.  The officer commanding the Chin Hills troops lives here as do also several officials connected with the Commissariat Department.

Nine miles above Kalewa, on the left bank, is the village of Balet.  ... Balet itself contains many inhabitants of Portuguese and French extraction, the descendants of prisoners of war taken by the Kings of Burma from Syriam, Rangoon and Bassein during the last century.

... brings us to Kindat, the head-quarters of the Upper Chindwin District.  The Government Offices and the Jail are protected from floods by bunds....   In the Burmese times the place was a strong military post, as the name implies (Kin, a look-out, Dat or Tat, a fort or stockade.)

At the outbreak of hostilities in 1885, several employees of the Bombay Burma Trading Corp. were seized and kept in irons hers, on orders received from the capital.  The Wun also, who was favourable to the British cause, was also kept under arrest, together with his wife and family.  They were relieved by a force under Col. Johnson, the resident of Manipur...

The Irrawaddy Flotilla Company do not proceed further north than Kindat, but in the rains, when the river is in flood, they proceed as far as Homalin 147 miles north of Kindat.  This part of the Chindwin is very sparsely populated and villages are few and far between.  The first halting place is at Pantha, on the left bank, fourteen miles from Kindat. After a run of nine miles, the mouth of the Yu river is passed.  This river drains the Kubo valley and received from the north the Tamu Chaung.  It was by this route that Lt. Grant proceeded to the relief of the Manipur garrison in 1891, when the Chief Commissioner of Assam and several military officers were massacred by orders of the Sonaputti.

The next important place is Sittaung, thirty-one miles north of the mouth of the Yu.  It was here that General Graham landed with his forces and proceeded to the relief of Manipur after the massacres.  Paungbyin on the left bank, twenty-seven miles above Sittaung, is the head-quarters of the Legayaing Sub-division of the Upper Chindwin District.

Mandalay to Maymyo
Maymyo is so called from Col. May, one of the pioneer officers of the field-force during the expedition of 1885-86.  He was one of the earliest to discover the salubrity of its climate and its adaptation as a hill station and sanatorium.

... Maymyo is the head-quarters of the Pwin-u-win Sub-division of the Mandalay District.  It is a military cantonment and a civil and military police station.  The principal public buildings are the barracks and officers’ quarters, the court-house, military and civil police posts, the Public Works Dept. and Forest Dept....
Civil Divisions, 1894/95
Lower Burma
Commissionership                     Executive District                               Chief Towns
Upper Burma
The Press 1894/95
Amherst (Moulmein Town)
Toungoo
Mandalay
Akyab
Rangoon