Scenes from the
Anglo-Burmese Wars
under construction

1824-26﻿
The first A-B war was with the East India Company and ended with the Treaty of Yandabo.
The gain was Assam, Arakan, Ramree, Cheduba, Sandoway and part of Tenasserim.
Minhla Fort
Fort Minhla, is situated on the Irrawaddy, this and two others, Asay Gan or Sagaing Fort (west bank) and Inn Wa Fort were commissioned by King Mindon Min in 1874 and built by Captain's Camotto, Barbieri and Molinari, Italian Naval Officers/Engineers in co-operation with Burmese Engineers.
A slideshow of photos of the the other two forts can be found at the end of the page.
Cannons
The Ava Medal
​Presented to the British troops at the Annexation of Burma
The 2nd A-B War

1852 - 54
The gain this time was the entire coast line.
".. So Rangoon was taken in a manner which reflects nothing but credit on the courage of both attackers and defenders.  It may be noted that whereas in 1824 the town and Pagoda had been taken without the loss of a man, in 1852 the attaching forces lost ​16 killed and 133 wounded, besides some thirty of the naval force." ​
Colesworthy Grant sketched the following portraits and made comments about each gentleman.  Grant was the official artist with the Mission to the Court of Ave, 1855.  In recognition of his ability King Mindon Min presented him with a gold cup and a ruby ring.  Major Phayre's Mission was to persuade the King to sign a treaty acknowledging British rule over Pegu Provence which was annexed after the 2nd A-B war in 1852.
​Extracts from
"A Photographic Expedition in 1862"
See below for a brief narrative. 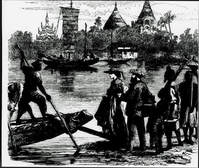 Mandalay
Feb.   ...  As we came near Mandalay we saw a little Burmese steamer preparing to start.  A son of Cameretta, the Court favourite was on board.  He tells us that the city walls of Amerapoora are pulled down and that cotton grows where the palace stood five years ago....  and anchored finally close to the royal barge.  This boat is really beautiful as well as curious. You must imagine a tall, elegant tower, placed upon two gilded canoes. The prows are in the shape of griffins bestridden by fabulous birds called karawicks.  Figures of the king and the nats (fairies) are on either side of the griffins.  All these are covered with looking-glass in mosaic, having the appearance of plate-armour.  The sterns are very tall, of pierced work, surmounted by canopies hung with bells.  Every portion of this floating tower is elaborately carved and gilded....

Mar.  ... Fr. Abbona a Romish priest has a successful mission here, his chapel and the houses of the Christians are without the city walls.  (Also has a boys school in the premises and a girls school outside the church premises.)

... An interview with Camaratta (A European who is a great favourite at court.)... we set off from Mandalay for Meengoon where there is an enormous pagoda ... on the north side of the pagoda is the largest bell in Burmah.  A low wall of about four feet in height enclosed a considerable area, in the centre of which was a circular platform of five low terraces.  Upon the platform were two pillars of solid masonry and from timbers fastened together by copper or iron bands hung the bell and the stout cross-beams were actually bent by it enormous weight.  The base of the bell was supported by wooden figures of crouching nats or bilous and the comical expression, still visible on the faces of one or two seemed to remonstrate against the weight.  There was just sufficient room to crawl under the lip of the bell.  Pieces of gold, which had been thrown in evidently during the founding, were visible...
The 3rd A-B War

1885/6
​
Resulted in the deposition of King Thibaw and the entire country being taken over.
​ "After a fierce engagement the British took the Minhla Fort on 17th Nov. 1885."
Fort Dufferin (ex Mandalay Palace) c. 1885
Further Reading
An article donated by Hew Prendergast, g. grandson of Major-General Sir Harry Prendergast.  Memorials and Trophies - 3rd Anglo-Burmese War.
​
Bill Clements of the Fortress Studies Group has provided us with this in-depth history of the ﻿Fortifications of the Kingdom of Burma.﻿

This fort is situated at the top of the "triangle" of forts on the Irrawaddy River, commissioned in 1874 by King Mindon Min